Minsk is very clean and spacious city. We were a small team of 5 that arrived to pray in Minsk, 3 from Germany and 2 from France. The plan of action was quickly decided. Mass murder and the Jewish history had marked the history of Belarus. 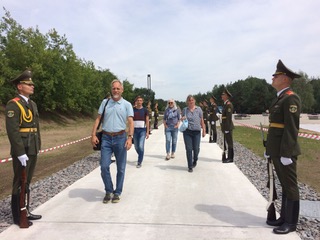 So the first morning we went to Maly Troscianiec, a place in the forest just outside Minsk where the Nazis had killed 206 000 people with guns and pistols from 1941 to 1944, among these 150 000 Jews. Now, there was a new place of commemoration made and the presidents of Germany, Austria and the Czech Republic, amongst others, were coming for the inauguration the next day to recognize their respective nations’ guilt. (www.dw.com/en/belarus-an-unknown-story-of-the-holocaust-brings-forgotten-camp-back-into-europes-conscience) So, it was very key to go and pray in this place. We didn’t know about this event before we planned the dates of the trip. We believe this is very important for the healing of the nations.

In the afternoon, we went to where the old Jewish ghetto was. We started by going into the synagogue there and to our surprise we were warmly welcomed by the rabbi who showed us around and shared with us about the synagogues and the Jews in the city. All this despite the busy program he had with the inauguration the day after. 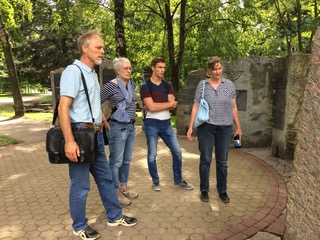 sent from different German city of their recognition of the killing of the Jews sent from their cities to be executed in Minsk. The place was still heavy and oppressive. Minsk was once 50% Jewish and this place was definitely an important place to pray. It will probably need more prayers as well, but we were glad we could participate in bringing this place before the throne of God.

We took the bus direction north to a Jewish social center with a quick prayer of blessing there. Then we walked to an orthodox Jewish synagogue. We were welcomed in and had some prayers of blessings there as well. And the first day was finished. 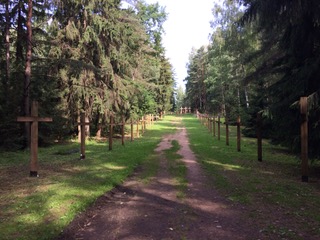 The second day, we went to another place of mass murder, this time it was the Russians who has killed between 30,000 and 200,000 people. This was only 5-6 km from the center of Minsk on the north side, so we took the bus there. This place was not recognized by the Russians for the genocide and when we got there the police were there. They didn’t stop us, but they were reporting our arrival. It was an impressive place. There were crosses on both sides of a forest road maybe 800m long. There were also many smaller crosses in the forest around were thousands of skeletons were laying in the earth. This day was a day when a group, fighting for this place and its history to become known and recognized as a genocide place, had an event. They wanted to protest because there had been a restaurant built on the skulls. We joined in on this. There were only 20-25 people; people are afraid of Russia and repression. And the police were there to intimidate us and bring fear. The following day as an example of this, 3 of the people who had participated in the protest were put in prison for 10 days!!
When we had finished and went back to the bus stop, the polish ambassador came with his team to put down flowers as an act of commemorating and honoring the dead. 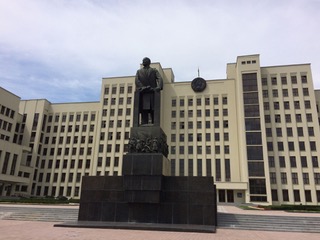 In the afternoon we went to the parliament, an impressive building from communist times with a big statue of Lenin in the front. We were not even allowed to get close to see what was written on the walls before the guard came to chase us away. So, we had to pray from a distance of about 100m. We prayed for a change and for the wall of separation between the people and the institution might fall down in particular. It feels like an empty and hollow place. We believe change is coming to the nation and prayed for the politics to favor that, like, for example, in the last 2 years, one doesn’t need a visa to visit Belarus for less than 5 days. It’s a beginning of opening up doors to come to this beautiful nation. Let it continue…..