April 22-24, 2013: We started this trip with a big youth prayer event that was streamed on internet live for young people in Slovakia. We got to share 15 mins there. That was a surprise !

Then we had 2 days of teaching focusing a lot on the identity of the nations. We got a good explanation of the Slovakian identity. In those days, one of the most corrupt men in the government, a party leader, was kicked out by his own party. Another surprise !

April 28-29: We were part of a church service in the morning, where the spiritual history of Bratislava was the teaching. In the afternoon, we started the intercession from the castle. About 40 people were split up in 8 groups praying in different places in the city. There were many good reports in the evening in the worship and prayer meeting.

April 29th, we were invited to the parliament by a member of parliament. He shared his conversion to Jesus, the situation in the parliament and different prayer points for him and the government. He spend 2 hours with us. We had a powerful time of prayer there, all on our knees at one time. There were about 35 of us. The Slovakian Christians were very much encouraged by this and it gave them faith to get more involved in prayer for the authorities.

In the afternoon, we went to the Devin castle 20km away. This is a place of significance since the authorities were established there some time in history and the first church in the area was started there. It has also been a place full of bloodshed, and it’s definitely a place for the church to return to. The reports in the evening were again very positive and we left Bratislava thanking God for what we could do together. 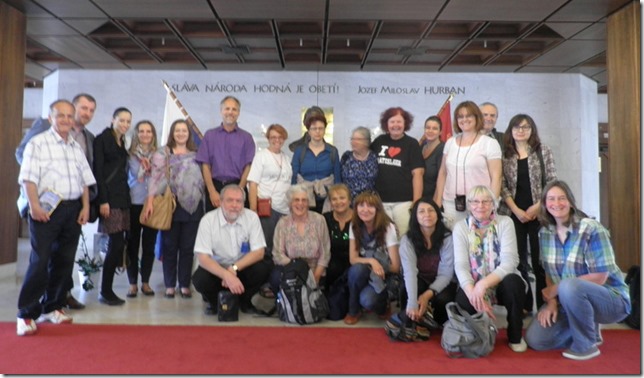 By Timotea Vráblová:
1) Preparing spiritual highways
2) How to read God’s signs in the city (or in any other places) and how to respond to them reflecting Christ’s priesthood and kingship.
3) Creative prayer as an extended way of prophetic intercession.