Kiev is also a beautiful city with wide avenues and a lot of monuments. But as we arrived there, it started to rain and it was rather cold while we were there ; 15°C and rain on and off, compared to 30°C normally this time of the year. A team from a House of Prayer joined us and guided us around the city. It was such a help.

We started to walk the Khreschatyk street, which is the most famous street in the city. We walked in the middle as it was closed off from traffic for the weekend. We 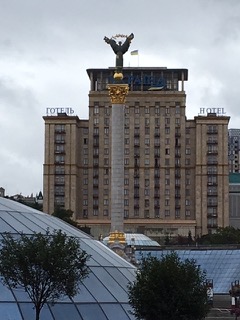 prayed for many things walking the street up to the Maiden square, also called the Square of Independence. At the Maiden square 118 civilians were shot by snipers during the demonstrations in Feb 2014. Our team said many of the snipers were in the hotel on the photo behind the statue of the woman representing Ukraine. It was a heavy price for the freedom. In this place we prayed into the identity of Ukraine, a beautiful virgin. God’s heart goes out to her. In this decisive time, we prayed she could turn towards God. There is a war in the eastern part of Ukraine where Russia is trying to get more land. We believe if Ukraine turns to God in this time, God will protect and give peace in the land.

After a late lunch, we finished walking the main street and went to an overlook with a view to the other parts of the city by the river Dnieper, the forth longest river in Europe. Our day of prayer finished here. We went to the House of Prayer in the suburbs of Kiev afterwards where we had a session in the prayer room before some food and fellowship. The locals were such a blessing in hosting us in the city.

The next day, we met up by the national museum. Outside was where the oldest church had been. The foundation wall was rebuilt over the ground. But this place also had a lot of worship stones, a totem and other monuments for pagan worship. This was definitely a place of spiritual intensity where the pagan gods/spirits wanted to break out. We saw signs of recent sacrifices and initiation to call on the spirits. We prayed at these places, knowing that our prayers have much more authority and destroy the efforts of the pagan worshipers. But this was also a place where St. Andrew had come and prophesied that revival would come and that the fire of revival would spread. We prayed into those prophecies and we stood on the foundations of the first church. 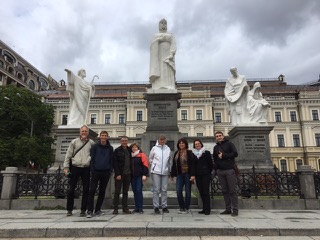 After this we walked through an area with a lot of statues and churches (orthodox). We took a team photo in front of one of these monuments. To the left is St Andrew, the apostle. In the middle is a queen of Ukraine that helped establish Christianity in the country and then to the right, Methode and Cyril, the brothers and apostles bringing the gospel in writing to the Slavic people. They are proud of their Christian faith and they honor people God used for that purpose. 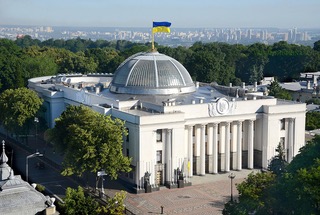 In the end we went to the parliament to pray there. It was raining a bit and not very pleasant, but we still had a good time of prayer. We prayed concerning the corruption and a change of the old system; for more young people to come into the parliament and make the changes needed. During the demonstrations in Feb 2014, many of the statues of Lenin were pulled down by the people around in the city and the nation. The reality of those acts needs to manifest in the government and the nation in general. It is time for that change.