From November 1st to 4th we started our prayer gathering in Madrid. We had 45-50 different participants involved over the 4 days. We met at On the Red Box prayer and evangelism room overlooking Puerta Del Sol at the very centre of Madrid. The city was outside our door. We appreciate the involvement and coordination of our time with Leo and Renee from YWAM Madrid and who are also coordinators of 365 a year-round national prayer initiative for Spain. Furthermore, we saw pastors from different churches in Madrid involved as well as 2 DTSs: one DTS from Torrejon de Ardoz (Madrid) and the other from Caceres. The leaders at the prayer room were also involved and we appreciate the care they showed to us in our time there. In the mornings, we prayed and worshipped together and then received teaching about the spiritual history of Spain and Madrid from Renee and Leo. Then in the afternoons the DTSs received teaching from myself on Intercession and Spiritual Warfare and then we went to the streets to pray at different strategic locations. 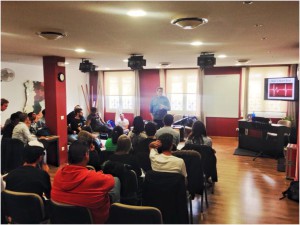 Teaching time at On the Red Box prayer room: Madrid

Our prayer times were spent praying for: 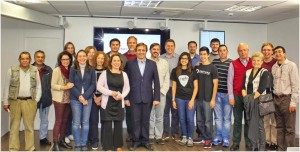 A highlight of our time in Madrid was meeting with the Spanish and international political Conservative organization Hazte Oir and Citizen Go. This was a fruitful time praying with Catholic believers. It was also a chance to agree with other Christians who are impacting Government both in Madrid and around the world. 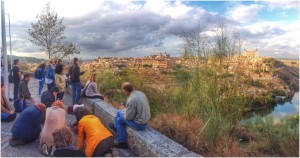 Praying over Toledo before entering the city

After our time in Madrid, we also spent a day praying at the old capital of Spain: Toledo. We partnered with the YWAM house of prayer there and I spoke on Humanism verses the Holy Spirit in Europe concerning the root of humanism in Toledo. This was followed by a powerful prayer time for a fresh move of the Holy Spirit in Toledo, Madrid and Europe. After lunch we felt God asking us to pray for the Holy Spirit and the root of humanism in Toledo and also for the history of Jewish persecution in Toledo. We went to the city and prayed, worshiped and danced across the bridge where the Jewish population was sent out hundreds of years previously. We also prayed at one of the locations it is believed some of Aristotle’s work was rediscovered, translated, and sent out through Europe to the world.