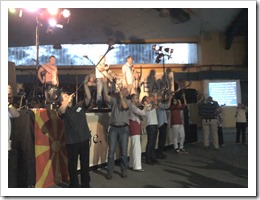 The European Trumpet Call gathered some European prayer networks to blow a spiritual wake up call for Europe. There were a bit more than 200 people in the mornings and up to 500 in the evenings from about 30 nations.

God blessed us with with His presence being strong and guiding us to pray His prayers for Macedonia, the Balkans and Europe.

We also had the honor of having Prince Philip of Prussia with us, telling the story of his grand grand-father Kaiser Wilhelm the 2nd, not resisting the pressure of the generals to start the WWI. He took responsibility for his family’s actions and repented for their wrong doings. 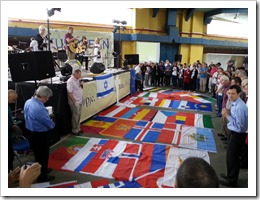 Brian Mills, who is a father in the prayer movement in the world, led us in prayer for the reconciliation between the nations; leading us in forgiving the people and nations around us. This was especially strong for the Balkan nations, and started some powerful work and release in the hearts that will continue in the weeks and months to come with healing of the nations as a result. 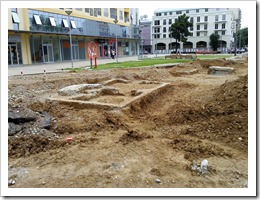 We were just a small team of 7 coming to Podgorica, but our prayers were very efficient and we were guided in what to pray in a very clear way by the Holy Spirit. Before going out to pray, we prayed for the foundation of the city. And the first thing we saw as we went out of our hostel, was that workers had found some old foundations as they wanted to build. The work had to stop as archaeologists were coming in to bring up the graves and buildings to find out the truth. The truth is really covered up in Montenegro and corruption is everywhere. We prayed according to Isaiah 28:14-19, that Jesus as a cornerstone should be put in the foundations, blowing away all corruption, lies and falsehood. 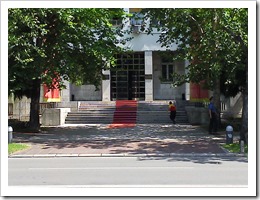 After this we had an appointment with an ex-minister being able to speak into his life and the future of the nation. In the afternoon we went to pray at a communist monument. Actually it was an altar and a worship place. That is strange for an ideology which doesn’t believe in God. This year makes 70 years that communism has been in Montenegro, which is a special time for God and as it is written in Jeremiah 29:10-11, the time of change has come and God is doing a new thing. We proclaimed these new things from the hill behind the city.

The last day we prayed some around the government, before we finished in front of the red carpet of the government and the presidential building, for the King of Glory to enter in and take His place.

Coordinator for the travel to Podgorica and Sarajevo: Henning Schikora: henning.schikora@gmail.com