Again we were welcomed with open hearts at the international church in Pristina, which was really in the center of town. We received a good explanation of the history of Kosovo and especially of 2 very significant monuments in the country ; The place where the Sultan’s heart was buried and a monument of the Serbs and their victory over the Ottomans. Both places are like pilgrimage places feeding nationalism and the claim of the land. 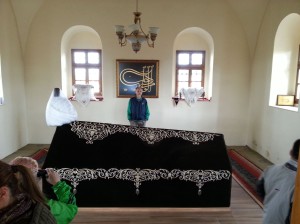 The burial place of the Sultan’s heart. The Sultan that had invaded Europe and wanted to islamisize it in 1489. Burying a heart like that is pure witch craft and influences the Balkans even today. 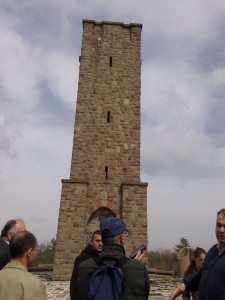 Close to this is a Serbian monument. Milosovic gathered about 1 million people in the fields in front and spoke (probably very much like Hitler) before the ethnic cleansing started there in the 1990’s. We had a powerful time of prayer there and it would be great to see exactly what happened as we prayed.

Later in the afternoon, we were able to go to the mayor’s office. He had been elected 5 months ago. His party was the 3rd biggest party in the country, but surprisingly he was elected. Maybe because he wanted to fight corruption. We had selected 4 people to go and see him in his office as we thought not many could go, but he invited all the team, 30 in his office. The testimonies afterwards from the Kosovars, was that they were impressed by his humility and wanted to pray more for him.

After that we split up the teams to go in front of the court of justice and the minister of justice. Justice and corruption are prayer subjects in the Balkans. God seems to be doing something about that in Kosovo as well as Albania.

The last day, we finished off by praying in front of the parliament, especially according to Psalm 2 and Psalm 24, for God to enter in to that place of importance.