We were well received by the YWAM team in Riga. We also had 2 new seasoned intercessors coming from outside to join us and more locals went with us for the prayer in the city. It was all a sign that the church is stronger in Riga than the 2 other Baltic capitals. 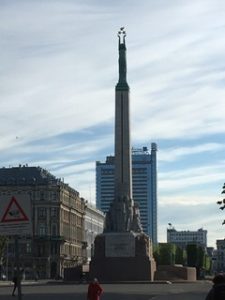 After first morning of worship, we got quite clear guidance about were to pray there was a straight line down the Freedom Avenue to the Freedom monument, then to the Rifle man monument and the Victory monument. We went to pray at these 3 monuments, in that order. These monuments symbolized a lot of the history and a lot of the painful history the last 100 years. Next year in November it will be 100 years since Latvia became an independent country for the first time. A lot of the history around these monuments could stir up a lot of emotions and enmity as the 100 years celebration approaches. There was also a lot of confusion around these monuments. There was a strong feeling of God wanting to write a new chapter of the history of the nation to start after the 100 year celebration. So, we prayed a lot around and about the enemy not being allowed to stir up strife from the history and for God to bring healing and reconciliation among the Latvians; the ones who had Russian affiliations and the ones with Latvian.

We really seemed to hit something very significant from God in the prayer. Our coordinator sent us this encouragement in an e-mail: I just wanted to again say a big thank you for coming, for your obedience and the very big blessing you were during these days here. I believe we will even in the coming weeks and months see greater evidence of what took place….. I also have a sense that a shift has taken place and something broken off…. 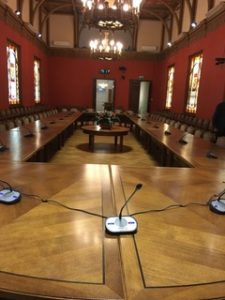 The next day we had a visit to the parliament. We were shown around by people who pray a lot for the government. After that we had a powerful time of worship and prayer in the chapel of the parliament. We prophesied many things, but a significant one was for fathers to raise up, fathers who would be real fathers to the nation and for a new song to be released and song over the nation.

In the afternoon, we went down to the river to pray into the foundation of the city. It turned out there was a legend about a monster in the river fighting against a hero in the city. Here we believe we were touching the stronghold of depression and heaviness over the city.

As a bonus, some people in the team joined the ministry reaching out to the men going for the prostitutes and others went to the place where the song festivals are held annually (a bit smaller than the ones in Tallinn)

Satisfied over the time in Riga and mission accomplished, we headed for Vilnius next day.