Our first OCE trip took us to the cities where the main institutions of the European Union are situated and began in Strasbourg.

The team of local people had done a superb job of preparing for our week there, which began with five days of worship and teaching and was followed by two days of praying in and around the city.

The main teachings were given by three speakers, the first of whom was one of the leaders from ‘Poland for Jesus’, He told us the incredible story of what God has been doing in their nation over recent years, how He spoke to them in advance, telling them the things that were going to unfold and also how He led them and continues to lead them in their dealings with various political figures in their nation.

We also heard from Georgina Dufoix and from another speaker who works within the Parliament as an intercessor who both encouraged us in praying for those in authority, explaining how God had led them in this and also how important it is for us to stand guard for our leaders in prayer so that they will be protected and less vulnerable to wrong influences. 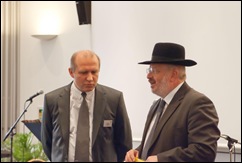 During these first five days we also had the privilege of meeting with the chief Rabbi and some others representatives of the Jewish community in Strasbourg. In preparing the week, the local people had felt God showing them that one of the sins that still hung over the city was what had happened to the Jews there during the course of history, notably the burning of 2000 Jews on 14th February 1349 when they were blamed for the Black Death and also during the 2nd World War when the only concentration camp in France was Struthof, just outside Strasbourg. We therefore took a time when representatives from 10 nations present, repented on behalf of their nation for the sins committed against the Jewish people. The Rabbi was presented with a document apologizing for these sins and we had also taken an offering to act as a symbolic act of restitution for all that had been stolen from the Jewish people throughout history. This offering totalled 4700 euros ! A lady from Switzerland was also moved to offer some gold jewellery as a symbol of the gold stolen from the Jews in Switzerland. This made for a very moving afternoon and was spiritually very important for the city.

The following two days saw us praying on site concerning various things that had been received. On the first of these, we all went to Petite France where we sensed some of the roots of iniquity in the city were situated. We prayed and repented concerning particularly immorality, idolatry, broken covenants and bloodshed, all of which bring a curse on the land, and we sprinkled salt in the water, symbolic of cleansing. Teams then continued on , praying at other sites such as the cathedral and the European Institutions.

The following day, during a time of worship and prayer, one small team went to pray again at Petite France, and another small team went to Gutenberg square, which was also felt to be significant. In the afternoon, we all went up to the European Parliament, prayer walked around it , and then a declaration was read in front of the Parliament building, containing scripture verses and proclaiming God’s purposes for Europe.

It was an intense time during which we really saw God at work and we have been encouraged since returning home to hear that since our visit, not only has a new prayer group started up, praying for the area, but also in the days following our visit, three votes were taken in the European Parliament, on euthanasia, the persecution of Christians and homosexual marriage, all of which have resulted in an outcome which upholds the Christian viewpoint. God is good !!!

The emotion is still too great to fully take in the significance of all that we were privileged to experience today!

I leave for Paris tomorrow and I already plan on testifying about this to the Protestant leaders of France to whom I will show your declaration; one that is simply unheard of in the history of Judeo-Christian relations.

Convinced of sincerity of the messages of repentance and the requests of forgiveness for the victims of these two thousand years of exile among the nations and in particular during the dark years of the Shoah, that each one of you were able to express with a rare intensity, I will intercede to the Most High so that this forgiveness is completely granted to each one of you, as well as to the churches and the people which you represent.

I wanted to take this occasion to write to you about this, and to thank you in the name of our community, and to thank the Protestant Christians, for the particularly generous donation which was received, and which will be devoted to a charitable work holding to the virtues of our two communities and which serves the members of our two confessions, which I hope to see even more united through this gracious gesture.

Additionally, Mrs. Herveux’s personal gesture went straight to my heart, and I ask that you would convey to her my heartfelt thanks.

With my sincerest gratitude,

Chief rabbi of the Lower Rhine