We were very well welcomed by Pastor Barry Ogden and the International Protestant Church of Tirana. That was a great help in every way. Such servant people are a big blessing. 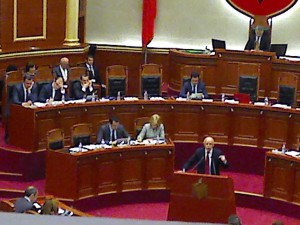 One day we were able to visit 2 Ministers of the new Cabinet that came into power about 5 months ago. One of them was raised as an orphan in a Missionary orphanage, and received Jesus as personal Lord as a child. He is now in a key position of the Government of Albania, a predominantly Muslim nation (!)

All of us who went into his office prophesied to him the Word of the Lord for Albania and for him personally. Here is a part of what I told him after I read Jeremiah 29:10-11 (notice the 70 yrs of captivity):

In 1944 Albania came under Communism; in 2013, 70 years were completed and the time of captivity of the Albanian nation by the powers of Darkness came to an end. The manifestation of the shift of seasons in the natural world was the change of Government; the previous one was Muslim and corrupt (e.g. there was no social welfare paid to the citizens for over 6 months). The new Government has Christian Ministers, cares for the good of the nation, and cares for the people.

Last week the new Prime Minister of Albania went to Germany. The (Christian) Minister with whom we met was one of the delegates, and shared with us that Angela Merkel spent 4 hours with them. It was the first time Albania was received so well in Europe, even by the most powerful leader in today’s EU. That was a confirmation of the shift in the spirit realm. 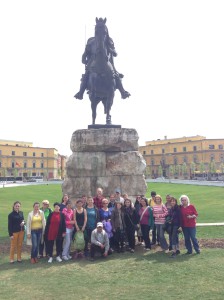 The day after we had prayed inside the parliament, the leader of the other party that had been prime minister for 22 years before this new government came to power, he resigned from politics. That’s another clear change!
We were also able to pray and prophesy over 3 other VIP’s in the nation.

Our presence in Albania this week, and the opportunity to prophesy to members of the Albanian Cabinet, is God’s additional witness to the message of the times:
He wants to give Albania a new identity, a hope and a future! We give God glory for all that happened during our time in Tirana