We arrived in Malta and went to the home of our host. There we were given a briefing on the history of the island, which had suffered many invasions, and miraculously fought some off. Malta was also the most bombed place in World War Two. Our host also shared that, based on the research of Bob Cornuke, the likely real place of Paul’s shipwreck landing was not at St. Paul’s Bay, but just five minutes’ walk from the apartment where we are staying. So we took a walk down there, and began Malta OCE where Paul had come ashore. Jeremiah 10

We had a morning meeting at the Happy Hive Café (a Christian owned and run coffeehouse). We started with a time of worship. In fact, it is believed that worship will be a key to praying in Malta. As we prayed, the issue of identity surfaced very quickly. Of the four Maltese people in attendance, two had exhibited a problem to simply identify themselves as being from Malta or Maltese, instead they had each launched into a description of their foreign roots. So we prayed and honored their identity as Maltese. 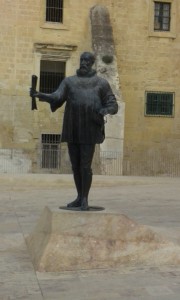 We had a prophetic word to pray at the low places, so our prayer walking strategy targeted the low places of the high city of Valletta. We started walking at the City Gate that has been rebuilt in a modern, open style, and walked a large circle route around the city center. We walked past the Prime Minister’s Palace and noticed that in the garden there was a fountain springing up like an artesian well.

We prayed at the War Rooms, which had been tunnels of refuge from the bombardment of cannon fire from invading ships, and more recently bombings of World War Two. Malta, as noted above, was the most bombed place in all the war.

Then we walked along the Grand Harbour to the Lower Barrakka Gardens where we prayed and had a time of worship. One Maltese man told of a vision he had:

He saw an underwater bomb. He explained that this was once how they made bodies surface from the water so that they could receive a proper burial. Then he continued that from that deep underwater bomb he saw ripples coming out of a central point and going out, getting bigger and bigger.

The Maltese saying: “Go find a Turk1” was redeemed in song thusly:

And tell him about the Lord.

And love him in the Lord. 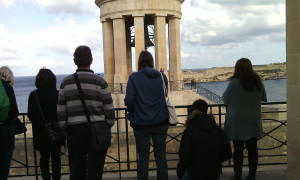 Praying at the Siege Bell

We sang and laughed and prayed into the Maltese identity of hospitality (as in Acts 28) and healing. We noticed another fountain in the middle of the garden, with water springing up.

Next we looked across to the Siege Bell, which had been used to warn of invasion forces. As we finished our prayers there, a softer bell sounded as if a joyous bell in the place of that alarm bell.

After praying there, we proceeded on to the Knights Hospitaller Convalescent Center. There we prayed for an end to the secrets, secrecy, and secret societies; to bring all the secrets into the light. Even though these Knights Hospitallers (Knights of St. Johns) are very different from the Knights Templar, nevertheless, secrets are not good for a place that has suffered in secrecy and from secrecy.

Then we walked to the Grand Master’s Palace / Presidential Palace, so named because it had been the palace of the Grand Master of the Knights and then was the Presidential Palace. In the piazza in front of the Palace there was another fountain with many places where water was springing up. We stood outside the Palace and watched the changing of the guards (which is significant—a change of the old guard!). Then we entered the courtyard and there in the garden we prayed. One teammate made a prophetic declaration for Malta:

Finally, we walked to the Parliament building, which is by our starting point at the City Gates. There we prayed, and one person noticed that the door marked “No Entry, MP’s only!” was opened. One of the Maltese men in our group entered in the door. There was another prophetic act in which a small Bible was placed on top of the Parliament sign, declaring that all the laws and acts coming from Parliament will be done under the Word of God and under God’s authority. One teammate noted later that the Bible was gone from the place, so we prayed that the Word would be planted deep into someone’s heart.

We started the day again at the Happy Hive Café, and a local Maltese pastor and his wife, among other locals, joined us. After a time of worship and prayer, the pastor encouraged us to look for the hidden things, not just those things that appear on the surface. Because there are many secret things that lie hidden under the surface. He also prayed for the Maltese people to receive an apostolic anointing. Then as a group we prayed for one of our Maltese hosts, commissioning her before she leaves the next day for a mission trip to Rwanda and possibly also for Uganda—on a one-way ticket.

After lunch we went to the Hypogium to go deep in prayer—under the earth, that is. We had prepared in advance by praying and writing Bible verses onto small slips of paper. Inside was carefully controlled, with a guide always with us. Nevertheless, we were able to get the papers into places, and to sprinkle salt to purify in every part of the Hypogium. One teammate asked the Lord how to pray inside with the guard watching and so forth. The Lord answered, “It’s enough that you’re here.” After the tour we gathered and prayed on the sidewalk just outside the door, then one teammate made a prophetic act of spitting on the doorstep of the Hypogium, as a sign of rejecting the death spirit and goddess spirit of that place.

Some of our group attended a local prayer meeting at the house of one of a Maltese couple. The worship and prayers flowed in the Spirit. This group has been meeting for several years. No doubt it is because of their prayers that Malta has been an easy place in which to pray.

One of the German members of our group knelt on the floor at the prayer group meeting. Without planning it, she was at the feet of three Maltese. One person asked her to tell them about her ministry of reconciliation. She explained that as a German, she feels led to pray and ask forgiveness for what her country did to their country. What the Germans did to Malta was to incite Italy to attack Malta. So she prayed and repented on behalf of the German people for what her country did to Malta. This was an important step before we leave Malta.

In the morning we joined a Charismatic Catholic prayer group for a time of prayer and worship. We shared the vision of OCE and they prayed for us.

After lunch we went to the far side of the Grand Harbour from Valletta and prayed in several places:

By the water we prayed about all the people that had lost their lives in the harbor and read:

Isaiah 27:1 – In that day the Lord will take His terrible, swift sword and punish Leviathan, the swiftly moving serpent, the coiling, writhing serpent. He will kill the dragon of the sea.

Ezekiel 29:2-4 – Son of man, turn and face Egypt and prophesy against Pharaoh the king and all the people of Egypt. Give them this message from the Sovereign Lord: “I am your enemy, O Pharaoh, king of Egypt—you great monster, lurking in the streams of the Nile. For you have said, ‘The Nile River is mine; I made it for myself.’ I will put hooks in your jaws and drag you out on the land with fish sticking to your scales.”

Ezekiel 32:2 – Son of man, mourn for Pharaoh, king of Egypt, and give him this message: “You think of yourself as a strong young lion among the nations, but you are really just a sea monster, heaving around in your own rivers, stirring up mud with your feet. 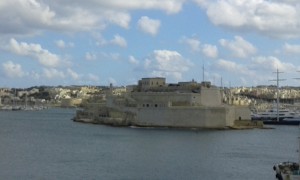 Fortress of Knights of Malta

At Land’s End at Fort St. Angelo we searched for the place where it is said that the Jews had been chained. We didn’t find any obvious place, but we did pray, repenting for the innocent Jewish lives sacrificed there.

In the enclosed garden area at the corner of Fort St. Angelo one of our Maltese hosts prayed in Malti, releasing a lot of things. As she prayed one of us commented that she could hear whispering all around us that stopped as the prayers finished. At the end of her prayers a bell rang in the distance, and simultaneously there was the boom as of a cannon. We all rejoiced loudly.

Inside the Fort we were waved off by the guards, saying that the Fort is closed. But a couple of us pleaded to be let in just for a moment to take a picture while a couple of others distracted the guards. The rest of us prayed outside the door.

At the Inquisitor’s Palace, again we found it closed, so we prayed inside the waiting room between the Museum and the Tourist Office.

We ended the day, praying at the Provence Gate that had been the stronghold of the French Knights.

After all this we went to the Happy Hive for a light supper there.

Feb 29 : Travel from Cyprus to Malta and start meeting in the evening