We were wonderfully hosted by the local Christians the day before starting the prayer.
We met with the pastor of our host church first thing in the morning. The prayer room was set up with a prophetic centerpiece: a map on the coffee table, covered by almond blossoms and a lamp. Key prayer points included division, invasion, brokenness, witchcraft curses, and identity. We also prayed for the pastor before he had to return to house guests. Then we strategized about where to pray in the old city.

Before going to the old city, we stopped to see a key person in the peace process. We listened to the person’s job description and other particulars, then prayed and prophesied. That this person was able to see us was nothing less than miraculous, and there was trust where there could have been fear, suspicion, or paranoia. Because this person is so key to the process, it is very important to keep the identity a secret. It is likely that this person is being watched, bugged, and possibly even followed. We prayed for angelic agents to intervene where human agents with bad intent might interfere with the peace process. It was very clear that our visit encouraged this person very much and helped to reduce the level of stress associated with the job.

Next we went to the Ledra Museum Observatory on the eleventh floor of the Shacolas Tower. On the way, we passed through the Paphos Gate of the old city and prayed there. We placed an almond blossom as a prophetic act. At the Tower we divided into teams and prayed into each of the four compass directions, with particular focus on the occupied north. The ticket seller came to speak to our group, and we shared that we are praying for her country. We asked for her prayer requests, and at the top of her list, what she said first was a Solution, meaning reunification. We also prayed for her, personally. 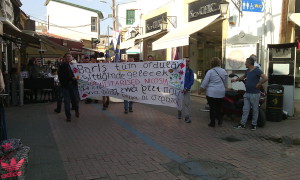 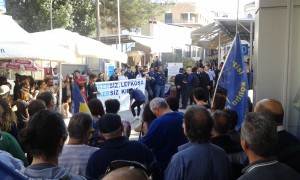 Breakdancing in front of police

After lunch we crossed the checkpoint into the occupied northern part of the city, locally called Lefkosia. Almost immediately after we all got through there was a demonstration marching toward us. They passed us, stopped just short of the checkpoint, and began breakdancing. So we watched and prayed. The marchers consisted of people from both sides of the border, demonstrating for demilitarizing Cyprus. The police just stood and watched. After dancing for about ten minutes, they quietly dispersed. 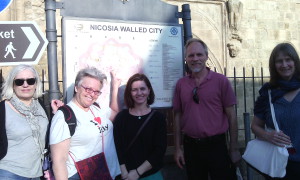 Team praying around the wall

Then we walked to the St. Sophia church, which has been turned into a mosque (one of the most prominent things that we had seen from the Tower). We decided to divide into two teams to walk around the church, praying. One team went clockwise, the other counter-clockwise.

After the church we went to the Bandabuliya Market, which is the old city market, and walked through it. The market had been shut for many years, and was a sad shadow of what it must have been in pre-occupation times, but we agreed that at least they had tried to revive it.

Next we went to the second of the three gates, the Kyrenia Gate, where we prayed and placed another almond blossom. While we rested there, we noticed on the map that the Turkish Cypriot Parliament and the Turkish Embassy were just across the street from one another, and that they were very close to the Gate where we were. So we decided that this was a strategic place to go and pray to cut off the connection between Turkey and Northern Cyprus.

There was a lot of traffic on the street between the Parliament Building and the Embassy. We prayed and planted another almond blossom. While we prayed the door to the Parliament had stood open. When we finished, a man came out the door, shut and locked it, and walked away. We felt that this was significant as a message to us that soon this occupation parliament would shut down and let the real Cypriot Parliament handle the ruling of a reunified Cyprus.

We attended the pre-service prayers at New Life Church. The prayer meeting was well-attended, and the prayer time was so good, and filled with prophetic words and visions, especially for the church’s upcoming move from their stable building into a tent.

The youth led the worship, which was very anointed. The pastor called our group up, prophesied over us, and invited others to do likewise (on paper for those with picture prophecies or who felt shy to speak a prophecy). It was very encouraging! It looked like at least one person from each family came up to give a word, either to an individual or to the whole group, even children. Then we were blessed and sent out for our last day of prayer walking.

We started at the Presidential Palace, praying by the exit gate. One thing that was prayed was that the puppet strings of those controlling the President behind the scenes be cut, and in fact, those strings were also seen as chains. We expect to see changes in his presidency.

Then we walked a short distance across the road to the Ministry of Foreign Affairs. It was felt that the approach to foreign affairs was xenophobic due to the island being partly occupied. So we prayed to break off all fear and mistrust of foreigners, and that righteousness, especially with regard to refugees, become their response and way of dealing with foreigners. 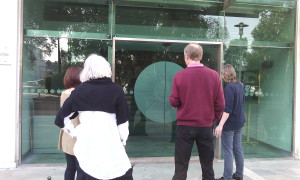 Praying in front of parliament

After that we walked to the Parliament Building, which didn’t look at all like we had expected. The front door was an automatic-opening glass door with a smiling sun. A face on the sun is a pagan symbol for the sun god. This and other elements became part of our prayers for the Parliament of Cyprus. We poured water across the threshold as a prophetic act. And we read the following passages for Cyprus:

Isaiah 51:9 – Wake up, wake up, O Lord! Clothe Yourself with strength! Flex Your mighty Right Arm! Rouse Yourself as in the days of old when You slew Egypt, the dragon of the Nile.

Isaiah 52:1-3 – Wake up, wake up, O Zion! Clothe yourself with strength. Put on your beautiful clothes, O holy city of Jerusalem, for unclean and godless people will enter your gates no longer. Rise from the dust, O Jerusalem. Sit in a place of honor. Remove the chains of slavery from your neck, O captive daughter of Zion. For this is what the Lord says: “When I sold you into exile, I received no payment. Now I can redeem you without having to pay for you.”

Isaiah 52:8-10 – The watchmen shout and sing with joy, for before their very eyes they see the Lord returning to Jerusalem. Let the ruins of Jerusalem break into joyful song, for the Lord has comforted His People. He has redeemed Jerusalem. The Lord has demonstrated His Holy Power before the eyes of all the nations. All the ends of the earth will see the victory of our God.

Isaiah 11:1-5 – Out of the stump of David’s family will grow a shoot—yes, a new Branch bearing fruit from the old root. And the Spirit of the Lord will rest on Him—the Spirit of Wisdom and Understanding, the Spirit of Counsel and Might, the Spirit of Knowledge and the Fear of the Lord. He will delight in obeying the Lord. He will not judge by appearance nor make a decision based on hearsay. He will give justice to the poor and make fair decisions for the exploited. The earth will shake at the force of His Word, and one breath from His mouth will destroy the wicked. He will wear Righteousness like a belt and Truth like an undergarment.

Nehemiah 5:11-12 – “You must restore their fields, vineyards, olive groves, and homes to them this very day. And repay the interest you charged when you lent them money, grain, new wine, and olive oil.” They replied, “We will give back everything and demand nothing more from the people. We will do as you say.”

Acts 19:19 – A number of them who had been practicing sorcery brought their incantation books and burned them at a public bonfire. The value of the books was several million dollars.

Then we walked to the Famagusta Gate and found there a celebration of the Congenital Heart Disease Association’s ten year anniversary. As we began to pray, we were interrupted by volunteers from the Heart Association who invited us inside for refreshments. We told her that we would come inside in a moment, and she was satisfied. Perhaps they were hoping for a better turnout than what they had. We prayed at the Gate, and then pouring out red wine in and opening the hasp of the Gate in prophetic acts.

Feb 29 : Travel from Cyprus to Malta and start meeting in the evening