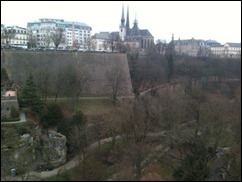 The team to the city walls

We prayed into the foundations of the city asking God to cleanse them, to shine his light into the darkness and to bring into the light things that are done in secret.

We placed verses of scripture into the walls and poured some oil at various points asking God’s presence to come into the city and be its real foundation.

One person received Isaiah 28:15-18a concerning the city’s covenant with death.

At the Court of Justice we had a strong sense of corruption and injustice in the city. From that point onwards we sprinkled salt as we walked. 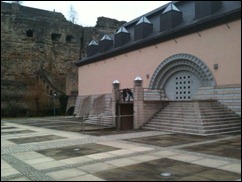 Then the next thought was : we will go to the source of the corruption ! We walked down to the river in direction of the old wall with holes/rooms in it. On the way we got the chapter Zechariah 5. One time it says : this is iniquities….. and then : this is wickedness. Then it talks about the 2 women, which we believe is 2 female spirits : political power and religious power, which is really iniquity and wickedness. We walked along the river. Then all of us saw a building to the right feeling that there was something unusual and significant about it. We believe it is a freemason lodge. The are a lot of symbols indicating that, even if the barman opposite the square said it was a theatre. So we prayed there. After that we continued but we felt our assignment was finished.

If you look up the official web-site under and read about the Melusina, (Melusina is a water spirit) you will see the same place taken on a photo from a different angle.

The team who went to the the cathedral and the Duke’s palace:

The cathedral is called « our lady, the comforter of the afflicted ones » (thus taking the name of the Holy Spirit). There were scenes showing processions dedicated to the virgin from the 17th century above the altar. The stained glassed window shows the life of Mary. The Queen of heaven reigns from there over the country. We had a time of repentance and prayed for revelations from God and for renewal for the priests, that they would be touched by the Holy Spirit. We prayed that people with a sincere heart would get a revelation of God. We also proclaimed Jeremiah 11 and Isaiah 47 and put these Bible verses in 5 different places in the church.

The buildings just around the cathedral are the seat of the government and its ministers. They are modest buildings. There are small statues of Mary on the facades. We prayed for the separation of the church and the state.

In front of the Duke’s palace we prayed for the Duke and his family. It was at the moment of the change of the guards, considered by some of us to announce the coming new times.

The national library has a small statue of Mary on the front. It is a place of knowledge, coming from Greek humanism. We read Proverbs 3:5-6. and took a time of repentance, proclaiming the knowledge of Jesus.

The team around the train station :

We walked around the train station and the surrounding streets. We prayed for things to come into the light. We understood that there are chains of darkness binding different people in fear and slavery including sexual. We proclaimed Ps.107 and also Ps.139. We then prayed that the Christians in Luxembourg would be courageous to take back the streets for God, believing, as written in Joshua, that God will give them every place that their feet tread upon. We prayed a lot for the light to shine into the darkness.

We were amazed to discover that this was the one day in the year when the tunnel under the city centre was open to the public. It felt that this was an answer to our prayer of the previous day that the foundations would be opened up so that the light of God could shine in. Two of us felt we were to take this opportunity to go and pray in the tunnel. Before leaving, God showed us to take with us 5 stones which we were to place in the tunnel. These represented the five stones that David took when he faced Goliath and the 5 battles the Israelites fought against the Philistines (1 Samuel 17:4, 2 Samuel 21:15-16, 18-20, 1 Chronicles 20:5). So we stopped in 5 places in the tunnel each time placing a stone and praying concerning one of the 5 issues raised by the scriptures ( shame/love, selfishness/generosity, lie/truth, arrogance/humility, setting wrong boundaries/ teamwork bringing freedom).

1 Corinthians 3:11 was also proclaimed stating that Jesus is the only true foundation.

We especially prayed where they spoke of Medusina and the story of Siegfried making a pact with the devil to get the city, which confirmed the verse of Isaiah which we had received the day before. We threw one stone into the source that is there.

On both days we felt the enormous love of God for the city and the nation. It felt as if He was weeping over the city as Jesus wept over Jerusalem and as if He was calling her to come back to Him.

One team guided by Tamar went to the EIB. We prayed general prayers about, blessings, light and truth.

Then there was a vision of crowds coming up from the bridge. Thousands of people crying from the street : justice, financial justice. The EIB was ready to receive that. The crowds continued to the other banks (in smaller numbers), and with their cry, some of the banks where touched and they were influenced to make more just decisions. But not all banks.

Then we prayed at the old EIB building for the administration, for Christians to meet together to pray inside.

Several had the feeling that some inside were corrupted and plotted evil with the pressure from the directors of other banks on the other side of the plateau. One person had had a dream before about a chess game. The king and queens and the big ones were using the ponds for their purposes, which was confirming that ; the private bank « buying » and manipulating some people in EIB. We prayed around that.

Then we went to the private banking area, and prayed some more there.

One team went to the European institutions to pray. We started by the European commission which is a part of the general communication and is crucial in the spreading of information to the media and the politicians as well as the citizens of Europe. It’s in Luxembourg that the translation into the 25 languages happens. We prayed for the people who work there, for a spirit of truth among them. We prayed in front of the different administrative buildings of the Parliament and the European banks and Treasury. In the latter we really felt the corruption linked to Mammon. We made several declarations in front of this building.