We were a group of 16 people coming to Luxembourg to pray for the (national) government this time. We were hosted by individuals in a church. We met in this church before and after going out to pray in the city. The first morning we were together with a prayer group of 12 people in the church. In the afternoon we split up in 3 groups. 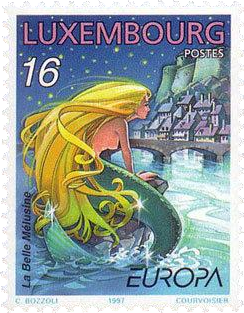 One group went to the Casamates, where Sigfrid first heard the song of Melusine, a mermaid, and build the first castle. He had to sell his soul to the devil to marry her. We prayed a lot into this ; the seduction, the covenant with death according to Is 28 : 14-17 and prayed that Luxembourg now would hear the song of Jesus, her Creator. To the right you see the Melusine on a stamp from Luxembourg

Another group went to the statue that represents the city. It’s a golden godess on the top of an obelisk. There they prayed for the identity of the city. Then they went into the heart of the city, to pray for that heart and speak words of life into it.

The third group went to the banking area, praying for the financial world with all the corruption and hidden things going on. This group also went in to the center of the city to pray.

The second day we all went together. First we prayed at the cathedral. Then we went to a square in the heart of the city. We declared many bibleverses speaking about the identity of the city. As we did people gathered curiously around us. We could pray for one lady that was very moved.

After this we went to the Duke’s palace and the building of the presidency of the parliament. We prayed for both and declared several scriptures. We were content with our time in Luxembourg believing we did what God had asked us to do. 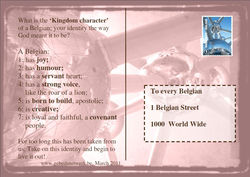 Our time in Brussels was very encouraging. Last time in January we believe something was born concerning the belgian identity. There was enthusiasme when we left last time. But before arriving this time, not many people had registered (also because of other things happening at the same time), so we wonder what was new.

Then the second day of prayer, the declaration to the right was brought. A belgian prayer network has made this. If this can be believed and spread, it has the power to change Belgium. Yes, this is definately something powerful that has been born!

The first day we were 18 of us going to St.Gery and “La Grande Place” (the big square). St.Gery was the oldesr center of Brussels, not the Grand Place as many believe.. We prayed a lot for the foundational identity of Brussels to spring forth at St.Gery. We had an inspired time of prayer all together there. At the Grand Place, we split up in 3 teams praying at the different important buildings. 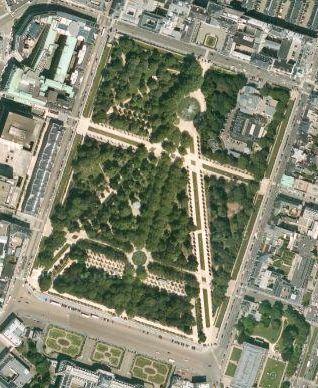 The second day we went to pray at the federal government building, the King’s palace and the garden between. Belgium has been without a government since June 13 last year. The garden between the 2 buildings of authority is full of freemason symboles. It’s called the Warande Park. In a book we saw, “The secrets of Brussels”, it explains all the freemason symboles they have made in the park. You can easily see many of them on the photo. We walked and prayed over the whole area in 3 teams. We prayed for things in the darkness to be exposed by the light. Is 28:14-18 was a good declaration.
This was definately a place of authority. Psaume 2:10-11 was very fitting as well:
Therefore, you king, be wise; be warned, you rulers of the earth.
Serve the Lord with fear….
Kiss the Son, lest He be angry

We left this place and Brussels happy to have accomplished what we should. 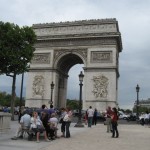