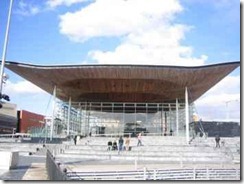 There were 15 people on the team for Cardiff and this increased to 45 people with the prayer group from Belmont Baptist Church and then to about 65 at the Sunday service that OCE Cardiff led at the Church. The days consisted of teaching by David Sladden which focused on the spiritual history of Cardiff from the Roman era all the way through to modern history and recent moves of God like the 1904/5 Welsh revival. Gary Smith, leader of Ignite Ministries Cardiff, also spoke on the current spiritual climate in Cardiff and referred to past moves of God as he compared now and then. He stated that unity amongst the churches was a big prayer need. Colin and Mavis Harris gave significant input as prayer coordinators in Cardiff and their insight inspired us to continue to pray where others had left off. Worship was led by, myself, (Steven Hanratty) and Paul Verheul, who did a great job. Jennifer Page did the registration for Cardiff: thank you Jennifer. Liverpool School of Evangelism who were on outreach in Cardiff helped out so much in finding contacts for our trip, so thank you to them also. 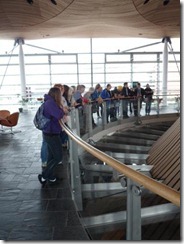 The first evening at Belmont Baptist Church focused on worship and preparing our hearts for the coming week. Belmont Baptist Church prayer group joined us. As we worshiped a lady who was dancing with flags at the back was invited forward to raise a banner of God’s love over the nation. Later she explained to one of the group that her back was in great pain because of a dancing injury from several months ago. Two or three gathered around her and prayed for healing and then a word about restoration for her body and her gift of dancing was given by one of the team. She explained that usually the pain goes on for the whole week without getting any better. The very next morning she gave testimony of waking up with no pain whatsoever and that it was a real healing from God. This healing was confirmation that God didn’t only want to heal individuals in Cardiff but He also wanted to heal the city of Cardiff, and the nation of Wales.

Our prayer times began at the Assembly building in the Cardiff Bay area where we were given a tour of the Assembly building and learnt about the history of the architecture and devolution of the political authority from London to Cardiff. The building there is modern, transparent and communal in nature. It was said to represent the intentions of the architect who had strong beliefs about how Wales should be governed when it was given back authority to make decisions for itself. In the middle of the Assembly, above the Assembly Chamber, where decisions are discussed and made, there was a tree like formation and it was said to represent the growth of the nation of Wales and the health that would come from the decisions made in government. The chamber could represent the roots of the tree. Whether the government in Wales is currently making good decisions or not, the focus was on the symbolism of the building and this was a powerful metaphor. 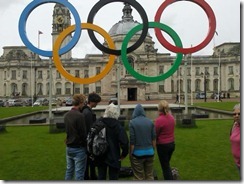 After the tour we made our way to the Lighthouse Ship in Cardiff Bay. A Christian ship with a coffee shop about 200 metres from the Assembly building. In the small chapel on the boat we prayed that the Welsh Government would be like a tree planted by streams of living water and that its fruit would be godly fruit (Psalm 2). We also prayed that Wales would have a new model of government that could be adopted elsewhere in the world. A new model of government that is transparent, non-argumentative and life-giving: just like the building represented. It was noted that the building was almost the opposite of Parliament in London with its ancient architecture, dark lighting and small back rooms where much of English politics is discussed. 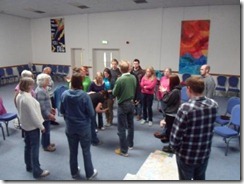 Our prayer times at Belmont were powerful and anointed. As we gathered we prayed specifically for Christian Bible colleges in Wales that were currently in transition and that out of those Bible Colleges would arise leaders who could make room for God to move in power and revival again in Wales. We prayed specifically for the way in which the Bible would be taught in these places and that it would be from a healthy and Holy Spirit-led perspective. 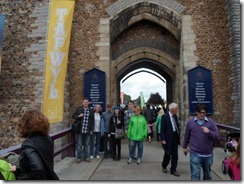 After having Gary Smith share about the current spiritual climate we realised that God had brought together two groups of people that evening: the evangelists and the intercessors. Both gifts that are central to any move of revival. We moved into a prayer time specifically praying for the unity of these two gifts. As we prayed further we realized God was asking us to pray for the church to be healed from disunity and broken relationships in Cardiff. The local group stood in a circle on the inside (facing inwards) and prayed for unity. The international team stood facing out to protect and be like watchmen, in prayer, over the healing process. 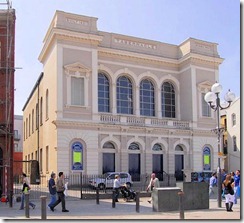 The very next evening after a day of teaching we prayed for the continuation of a restoration of the Welsh language and culture specifically because the moves of God in Wales have been predominantly in the Welsh language. As God moved us to pray and sing in tongues, because it is the heavenly language that God wants to restore to His people, we witnessed a young Welsh lady cry out for God to move in the Welsh language and then sing, in Welsh, a child’s worship song over the people in the prayer meeting. We then prayed for the next move of God to go out from Wales to Europe and the rest of the world. God then moved on the Welsh people in the meeting to pray for the others from around the world as a representation of that move. 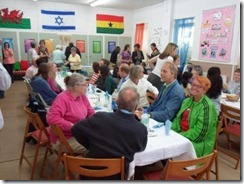 On our third day of prayer we prayed for the Healing on the Streets ministry at Woodville Baptist Church and for healing for one of the members in the team. Then we split into small groups and prayed around three different areas.

The first team went to pray at the Cardiff City Government, the University and also the Castle.  As the Olympic sign was outside the City Government buildings they prayed for the Olympics.  They prayed that the City Government would give the churches favour while they did outreaches in the city during the Olympic Games and that the wind of God’s Spirit would move on Cardiff and bring about "winds of change" through the city government and the city of Cardiff. The team were led specifically to pray outside the new building for the Royal Welsh College of Music and Drama and felt that God wanted to use the creativity of the Welsh in bringing the gospel to Wales and the nations. At the Castle they walked around the walls and prayed for the purification of the foundations of the city and as there were flags flying from many nations, they prayed that God would raise up Wales in the eyes of the world and take its place among the nations. 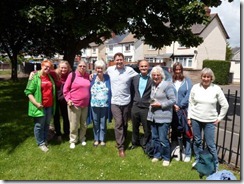 The second team went to the Cathedral where they had felt led to pray for the rededication of the Cathedral. They prayed that it would not be dedicated this time to idols from ancient times, like waters spirits or other gods, but to the one true God. They arrived to a fanfare of trumpets and a full Cathedral. The Cathedral was already being re-dedicated and mayors from different areas and church officials were there to rededicate it. It would seem that God had ordained the rededication to be about Him rather than any other. That team also prayed over the river flowing by the Cathedral and prayed for it to be a river of the Holy Spirit: pure and undefiled.

The final team went to the Castle, the Stadium and 4 churches in Cardiff. As they arrived at the Castle they realized that it was open to the public and there was a Welsh language and cultural festival going on with TV cameras, music, art and food. It was confirmation that God wanted them to pray for the Welsh language and culture as He had guided the evening before. The group also prayed for a root of conflict and disunity in the city brought in by the Roman soldiers when conquering the area. This group then went down to the riverside and prayed for the stadium which was a representation of a modern Cathedral and had been used for Songs of Praise (A Christian TV programme). As the team walked to the Tabernacle (Welsh speaking church) in Cardiff they were met outside by the treasurer who was locking up and they asked if they could pray in the court yard. The treasurer said that he could do better than that and invited them into the church building and they all gathered in the sanctuary to pray.

The treasurer described how this was one of the only churches to welcome the Welsh revival of 1904/5 in Cardiff and he described how in one day 700 were baptised in that move of God. He cried as the group prayed for him and said he didn’t understand why God had sent people from all over the world to pray for him and the Tabernacle church that day. They ended their time by asking him to pray for them in Welsh: it was a powerful moment. 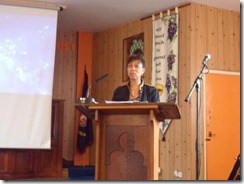 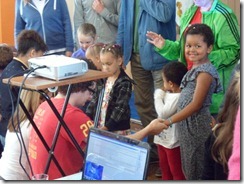 The final morning was spent with Belmont Baptist Church. We took the service on the Sunday morning and then they prepared a wonderful banquet to send OCE Cardiff off to the next assignment. Wendy, the lady who was healed gave her testimony and Carol spoke about her encounter with God in Athens. It was a powerful time and many, even the children, received a fresh move of God’s Holy Spirit. All the glory must go to God. Praise Him for all he has done.