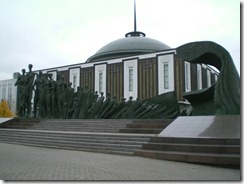 We were welcomed to Moscow by our host who is a member of the Orthodox Church but met each day in a German Lutheran Church and were joined by various people from these two churches and also from the Catholic Church. This in itself was very significant as there is usually no contact between the different believers.

We were touched by the fact that they quickly came to trust us and shared from their hearts about their difficulties and challenges. This was precious because they admitted that they were used to living in denial concerning their suffering, particularly linked to the Soviet years, but with us they were able to talk and then to pray, thus allowing God to begin to touch and heal them.

They had prepared a very detailed timetable for us and we also had some things that God had put on our hearts, so by putting them together we were able to have four very full and very powerful days of prayer and worship together. 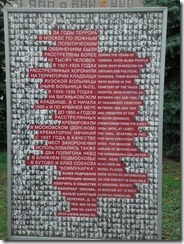 The first day we went out to Victory Park, a large park devoted to the victory over the Nazi regime in the Second World War. We had 4 German people among us, including the leader of our team, so we took a time in front of the holocaust memorial to confess sin and give and receive forgiveness.

On the second day we went a little outside the city to the site of a former Soviet gulag (concentration camp) where at least 20,000 people (and maybe as many as twice this number) were killed. The horrors of what happened here were difficult to hear and the people are still very marked by these things. We were able to have a deep prayer time here, praying for the healing of the land and the people and then sharing communion together.

The next day saw us praying first in the subway deep under the city where many of the stations are still full of statues and mosaics glorifying Stalin and the Soviet regime, then at the Kremlin where we were able to pray concerning the current leadership of Russia.

The last day of prayer was devoted to the churches in the nation. We had a long time of repentance for the sins of the church and read out many passages of scripture, declaring God’s plan and vision for His Church. We had intended to go out and pray at several church buildings but God led us instead to remain indoors and go really deeply into this subject. In the evening however, we did go out to meet up with a group of people from a Pentecostal church whose building had been bulldozed just a few weeks earlier. We stood in the dark and freezing cold, on a muddy patch of ground next to where their building had stood and prayed with them and for them. We then took up an offering for them, thus sowing a prophetic seed for their future as a community. 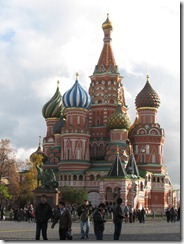 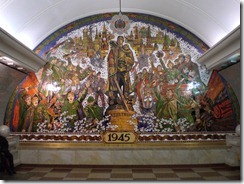 On our last day we made our way through snow and rain to share a meal with those who had joined us during the week. Prayers were said and hugs exchanged. We felt we had made a deep connection with them and they told us that although in the past some people had come to teach them, no-one had ever come to pray for them and they were obviously touched by this.

Since our return, we have had an e-mail from one person who joined with us which confirms this. This person thanks us, saying that she has never before experienced such deep and powerful prayer and that they plan to continue to pray for their city as we showed them. Wow!