OCE Balkans – report from the trips to Sofia and Skopje

Both events were carried out successfully and the glory of the Lord was manifest in different ways, and on various levels. Reflecting on those wonderful times, here below are a few thoughts that surface at the very top and need to be recorded for the glory of our Lord Jesus Christ.

The success of this OCE trip to Sofia and Skopje, and the subsequent blessings we enjoyed through it, was largely thanks to the networking and prayer initiatives that have been undertaken through the recent years by local leaders, for the sake of the Balkan nations. Philip Rashev from Bulgaria, who organized the OCE Sofia, and, Pastor Aleksandar Vuletic working as a team with Bryan Brenchley (visionary, coordinator and prayer leader for the Balkans) who organized the OCE in Skopje, have been instrumental in raising prayer for the nations of the region, and promoting strategic cooperation among leaders across the borders. We thank God for them!

The most dramatic event occurred on the day of arrival into Sofia; the Government of Bulgaria resigned, after much turmoil in the country, which led to conflicts with the Police and bloodshed.

We perceived the timing of the event as the Voice of the Lord saying “this is the timing for a shift in government”, meaning, also in matters pertaining to the Body of Christ and its leaders. No wonder our host Pastor, Pavel Ignatov, had also resigned a few days earlier, from a position he has had as leader of many churches in Bulgaria. Further, on Sunday 24 Feb. the Orthodox Church of Bulgaria was scheduled to elect their new Patriarch! 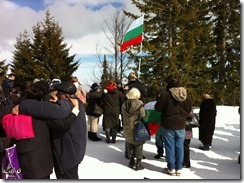 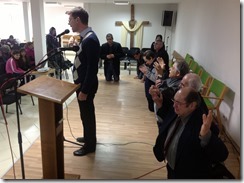 When the event of the OCE in Sofia was decided a year earlier, we had had no knowledge, and none could predict, that it would be God’s timing for a major shift in the heavenly places, causing major shifts in positions of government on the earth. As Pastor Pavel Ignatov repeatedly said, that was a “a sign from God” that the Operation Capitals of Europe in Sofia was an event for which God sent His servants to perform His good will in Bulgaria.

We give thanks to the Lord for Philip Rashev who did all the hard work for the OCE in Sofia, and involved his Pastor Pavel Ignatov and their church. Thanks to them several Pastors attended. On the opening meeting 10 Bulgarian Pastors came to the platform to lead prayer for their country.

Philip also organized prayer for Sofia to be held on Mount Vitosha, overlooking the city. That memorable event was held on Saturday morning. Even though Vitosha was covered in snow, the Lord granted us good weather that day so we could reach the place where we could pray from. 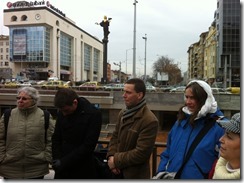 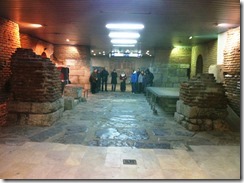 We also prayed a lot for the foundations of the city. It’s not a coincidence as the government did a lot of road and city building the recent years, they uncovered the foundations of the ancient city which was called Serdika. As the physical often is a reflection of the spiritual, we saw this as a sign. We prayed often Isaiah 62:1-6, praying for the new name and identity as God sees the city to come forth. Interestingly, where the ancient foundations were located in the city stood the statue of the goddess Sofia (whom the city derived its name; her name means ‘wisdom’). We prayed there strategically, for God to expose false wisdom (James 3:15) and grant the new government “wisdom from above” (James 3:17).

We also prayed and declared Psalm 24 for the Government and in front of the main entrance door; that Jesus, the King of Glory may come in there!

The event was closed with a celebration lunch after Sunday church service in Sofia, before the OCE team and 3 Bulgarian friends drove off to Skopje.

An awesome testimony of God’s power released through the OCE in Sofia became known to us on Sunday 3 March, through a Bulgarian sister who has been praying for the salvation of her family. Two ladies in Bulgaria suddenly opened their hearts to Jesus and started praying and reading the Bible, as each one separately had a divine visitation on Friday 22 February. That was the 2nd day of our prayers in Sofia, and more specifically, the day we prayer-walked in the center of the city!

Pastor Sasha (the main host of OCE in Skopje) started a new church plant, and, 4 new believers were baptized in water the same week with OCE in Skopje. Can this coincidence of timing have been ordained by God to reveal that it is His timing for a “new church” to arise and conquer new territories for God’s Kingdom in the land? This new church plant is at a location where there are no other churches; the place is called “Aerodrome”, literally meaning “air-strip” or “air-way”. Can this be prophetic that this new generation of believers will be like eagles flying high? This is certainly one of the purposes of OCE visiting every capital in Europe for prayer; to encourage the local Body of Christ to continue spreading the Kingdom of God.

Pastor Sasha and prayer leader Bryan offered strategic insights in regards to how to pray for their city, and did a wonderful job of preparation and planning the event, and inviting other local leaders to participate. They also invited people who represented the strategic areas of society (which some people call the “7 mountains” ( the 7 mind molders or spheres of influence) to present to the OCE gathering the spiritual climate and key challenges for prayer. We then had the opportunity to pray onsite at some of these strategic venues, including the TV station, the university, the parliament and places of worship like the United Methodist Church, the Orthodox church and the mosque.

Moreover, thanks to the publicity of the event by the Balkan Networks, the event in Skopje was enriched by the participation of people from Kosova and Albania, while Philip Rashev came along from Bulgaria with another two men, giving the meetings the colour of a Balkan Conference. 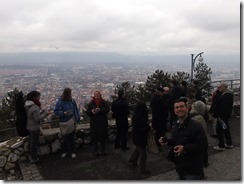 One of the highlights was our prayer from a mountain overlooking Skopje, where a remarkable sign occurred regarding the weather. It was very rainy when we arrived, and according to the weather forecast the rain should continue; that would be a problem when we would go out to pray in the city. We prayed and asked that as a sign of a breakthrough, the sun would break through the dark clouds. That happened while we prayed on the mountain over Skopje, and we had sunshine as we walked through the city praying at different strategic places. We believe that the sunshine and clear skies we had that day in spite of the gloomy forecast was a sign of a shift in the spiritual climate over the land. So we thank Jesus, the Son of righteousness for the breakthrough and give Him all the glory.