It was a historical time June 28, 1914 when the assassination of the Archduke Franz Ferdinand and his wife Sofia took place in Sarajevo which sparked the WW1.

We wanted to be there 100 years later. We had a good number of mature intercessors with us. God have plans to write His story from now on. Prophecies had already been given from international prophet 2 years ago saying that when the flooding happens in the land, it’s a sign that there is a shift coming and the hearts of the people will change. The flood covered 2/3 of Bosnia in April. 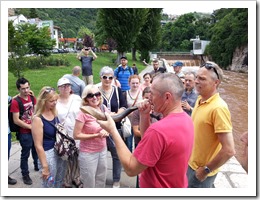 Praying at the river

Well, while we had worship before going out on the streets to pray, a radical Muslim knocked on the door of the church. He wondered if he could find Jesus there. Yes, we said and he did receive Jesus there!

There was unity and authority in the prayers. From the beginning God gave clear visions and words to pray; for the Lion of Judah coming and stepping on the dragon’s head. We started to pray where the river entered the city. People were gathered around us. One in the team of 35 got to talk to 2 young people who was touched by God as he prayed for them. The next day, he had an appointment because they wanted bibles. So, people are indeed open.

After that we split up in teams praying in different places in town. 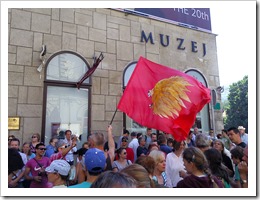 At the place of assassination

The 28th, we prayed before we headed for the place of the assassination. We had brought a big flag/banner with the Lion of Judah which was blowing in the wind while we were praying and singing with hundreds of people around us. Many people and journalists were curious and had good talks with many about God and got to pray for some. We were amazed that people were so open and that we could do that in such a place exactly 100 years after the famous assassination.

After one hour there, we headed for the fountain in the center of the Turkish area, where we started to pray again and then walk down the main walking street in worship, prayer and supplication all the way to the parliament. Well, we had to stop at the line where the cultures of the Ottomans and the Austro-Hungarians meets for some extra corporate prayer.

In front of the parliament, united prayers and declarations were made around Psalm 2 and Psalm 24, Isaiah 28:14-19 and Daniel 2; and we know that God will move in the government according to His Word.

We believe this was an important prayer time and we were honored to be there for such a time of history.