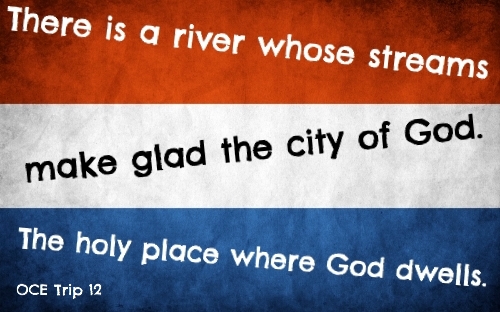 On September 14 the OCE core team arrived in the Hague to begin trip 12. On the morning of Monday, September 15th we began with teaching from Jeff Fountain, Arleen Westerhof, and Caroline Jones, a local lady from the Hague Justice House of Prayer. Jeff shared about God’s Christian heritage in Europe in the first session and shard about the valuable cultural and historical traits of Holland as a nation. It was a series of symbolic stories of the History of Holland. One story that stood out was that Holland was once a land of holes and marshes and together the people of Holland partnered to fill these spaces with solid ground in order to create a better and more stable geographical base.

In the afternoon, Arleen Westerhof shared about the need to reclaim the supply routes of Business and Economics so that the people of God can accomplish the Great Commission. Arleen’s central scripture for this teaching was: Deuteronomy 8:18 “You shall remember the LORD your God, for it is he who gives you power to make wealth, that he may confirm his covenant that he swore to your fathers, as it is this day.” The OCE very much felt that economics was becoming a focus in the next season for prayer for Europe. Shortly after Arleen’s teaching the Justice House of Prayer and OCE team prayed for Arleen for the upcoming European Economic Summit in Amsterdam.

Our first day of prayer began with seeking the Lord at the Justice House of Prayer. The main focus was to do with our schedule. We arrived in The Hague the day before to find that the King of Holland, William Alexander, was giving his speech in Parliament and setting out the budget for the year on September 16th. This was very interesting that our trip had coincided with this event so after praying we felt led to go and pray for the procession of the King to Parliament before he gave his speech. We went and prayed over the Golden Carriage of the King as he made his way to give his speech in Parliament. Our main aim was to pray blessing over him.

After praying for the King outside Parliament we walked up to the Peace Palace where the location of the International Court of Justice for the United Nations is situated we prayed there for international peace and justice and specifically for God to be judge and to bring peace over the nations.  We also prayed into the teaching we had the previous day about the disconnected relationship between the people of The Hague and the international community.  We prayed over the people in our group from Holland that they would be recognized and included more in the international process in The Hague.

In the evening, we had dinner with the Justice House of Prayer Community and then prayed into the night specifically for the salvation of the King and that God would use him in the Netherlands. We heard that he had spoken more openly than ever before about his intentions to pray for the people of Holland at the end of his Parliamentary speech: a real answer to prayer. There were many passionate prayers by the  people of The Hague.

On Wednesday, we set out to meet with an MP in Parliament in the morning. We arrived to be given a room in which we could pray and we spent the next hour and a half praying over the Dutch Parliament and politics. Prayers of cleansing and repentance for the Dutch Parliament were prayed. We specifically began to pray into human trafficking and when the MP we were praying for came to meet with us he shared that human trafficking was part of his portfolio of work for the government. In recent weeks, he had seen some encouraging breakthrough in the attitudes of the leaders in the nations.

He mentioned that the government estimates 70-80% of prostitutes in the Netherlands are trafficked. In the next year he will be pushing for the abolition of trafficking in Parliament with a view to eventually criminalize prostitution.  We then went for a tour of Parliament and sat in on the debate about the Kings speech in the main chamber. Interestingly, that evening one of the Christian MPs in the Parliament read from the Bible in the debate chamber after we had left; we were told by the prayer leaders this kind of thing hardly ever happens. This was an answer to our prayers from the morning session.

That evening we traveled to Amsterdam.

The first day in Amsterdam was dedicated to prayer at the European Economic Summit convened by Arleen Westerhof at the Dominion Centre Prayer Room. We began the morning with worship and the team from South Africa and the Prayer House in the north of Holland came to join us. We were about 17 people in total that day. After worshiping in the morning we felt like God was expressing a need for the church to once again manage wealth and money better that before. This was a balance between not becoming scared of wealth, and avoiding it, and not allowing the love of money to overcome us. (Luke 26:10)

After lunch we went to the prayer room downstairs in the Dominion Centre where next door the Economic Summit was being held. Arleen Westerhof (Dominion Centre EES Convener) and Stacey Campbell (the Call and RevivalNow) joined us. Stacey prayed that worship and wealth would go together and that our worship of God would be the balance we need to manage our wealth. This for many of us spoke of the poise Christians need between not being scared of wealth and not allowing it to be an idol: good confirmation. That evening we joined the Summit and heard from Graham Powers of Global Day of Prayer and his initiative: Unashamedly Ethical.

On Friday we spent the whole day once again at the European Economic Summit. This time Graham Powers (GDOP) joined us, and Paul Szkiler (Truestone Investment Group), an international leader in the Business as Mission movement. We had people stand in groups over different areas of Europe and I saw a bear prowling around the Eastern and Central areas of Europe. Then a Lion walked into that area of the group and sat down. The bear instantly left at the sight of the lion. I shared this with the group and realized that the bear had manifested itself recently in the shooting down of the flight from Holland in the Ukraine by the pro-Russian soldiers. I realized that the bear was the spirit of communism recently manifesting itself again. 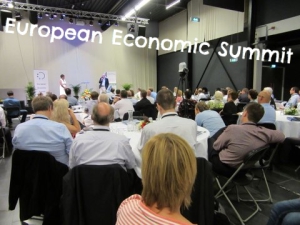 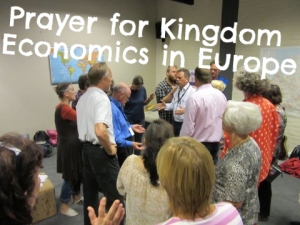 This lead me to ask to pray for Paul and Graham Powers as both of them had stood on the Eastern part of Europe and I believed they were both to take the Kingdom of God and the Lion of Judah to Eastern Europe in Business. We prayed for a while and then people just began to fall down as the fire of God came. Graham Powers was the first to go down and as God met with him the fire of God began to meet with us all. Various prayers were prayed but the presence of God was tangible and many were touched. We finished the day by hearing a Business as Mission leader share a talk about a Biblical perspective on mission and creating with God.

On Saturday our prayers would take a different direction. We met with some of the team from the Tabernacle of the Nations, part of YWAM Amsterdam. We prayed for unity in the church and rebuilding of the city of Amsterdam but felt lead to pray for the Tabernacle Team and the work that God is building through their prayers. It was an encouraging time for us all and once again God seemed to be speaking through the prophetic. One of the words was from Ezekiel and the valley of the dry bones. This was both for the Tabernacle but also for the church in Amsterdam. God has used the prayers of the Church to clean up the area around the Tabernacle in the Red Light district of Amsterdam and it is a testimony that intercession does really change things! 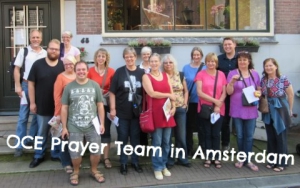 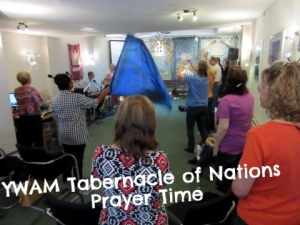 In the afternoon we were lead by Jeff Fountain around the city of Amsterdam as he gave great insight into the spiritual history of Amsterdam. In the evening, we had a time of feedback about what stood out about the tour and the information Jeff gave.  We focused on the idea of Amsterdam being a pioneering city and a place where new things were born and taken all over the world. This primarily came from a word about Amsterdam being like a womb, and a map of Amsterdam even looks like a womb from above. We prayed into the story of Hannah and Samuel’s birth and that a prophetic baby would come forth from the church in Amsterdam to call the people back to intimacy with God. We also prayed for freedom to come in the harder areas of Amsterdam. We specifically saw a root of human trafficking coming out of the city that God wanted to cut off. We finished OCE Amsterdam and The Hague by giving thanks for all God had done and said.

Thank you to the OCE core team and to all of the local, national and international ministries who took part in this OCE Trip.