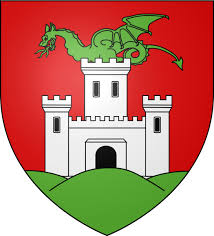 Ljubljana is a beautiful capital and since it’s not very big, it’s pleasant and worth visiting for tourism.

We were there with 14 people from abroad and from 7 nations to pray. We were hosted by local believers in the place of Campus Crusade for Christ, for worship, prayer and orientation. It became clear to us that we should pray concerning the dragon and its’ influence over the city for a long time. 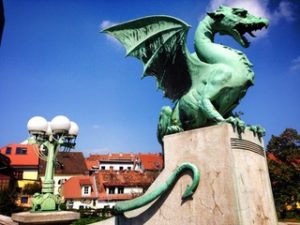 Since the dragon can also be in the water (a water spirit) as well as the air, we decided to focus our prayer and repentance the first day by the river Ljubljanica.

One team went to the source of the river, where stories said human sacrifice had been made as they prophesied (witchcraft) over the river and where it passed.

The other team went by the river where it separated just before the old town. Both teams brought salt and wine as symbolism of purification of corruption, betrayal and other kinds of evil; as a result of the spiritual influence of the water spirit.

The teams worked and prayed in harmony as one got a vision to pray through, another a scripture, another song, declaration etc. We could really feel the inspiration of the Lord as we were doing His will in prayer.

The second team continued to pray at different places by the river as they strolled down towards the center; at the shoemakers’ bridge which used to be the Jewish quarter, the triple bridge which was by the center down town where we prayed concerning freemasonry. And after a coffee break in the cold weather, both teams met up at the butcher’s bridge with all kind of weird art. And finally we finished at the dragon’s bridge. There we split up in 4 teams, each one taking a dragon and praying to shut the dragon’s mouth and influence in the capital.

The second day we got the plan to pray at the castle before ending at the parliament. At the castle, we split in 4 teams each praying as they were led. A couple of teams prayed about all that had happened in the secret and under the castle which was evil.

Before going to the Town Hall, someone in the team had had a vision of a well being locked up. And surely when we arrived there, there were 2 wells locked and covered with a metal lid on the top. We were encouraged and prayed accordingly, and since we pray something according to His will, we have it. 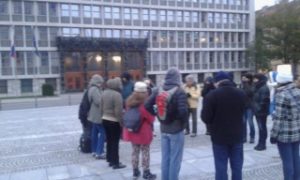 Finally we ended up in front of the parliament. Corruption was of course high on the list of things to pray for, but also the distance between the people and the government people. We declared a shift; that the ones who did not govern in the interest of the people would be removed. We prayed that people would rise up, and for government to reach out to the people and their interests. We finished with dancing on the Republic square.