We traveled to Zagreb Nov 14 and started with a meeting with the House of Prayer there right away. Then the next 4 days we had teachings in the morning and prayer in town in the afternoon as well as 3 more meetings in the evenings with local believers. It was all a blessed time and we could be an encouragement to the local believers.

We did some important work in prayer. We spent the first morning gathering from God what He had been saying to us and then making a strategy of how to go about. We found a spiritual highway for the Lord, that needed some stones to be taken away from it (see Is 62:10). The Vukovar street was there with the name remembering the slaughtering of the people there in 1991. It is estimated that 2,000 defenders of Vukovar and civilians were killed, 800 went missing and 22,000 civilians were forced into exile. This is still an open wound in the nation and we prayed the Croatians would be able to turn this page of the history with God’s help and healing. 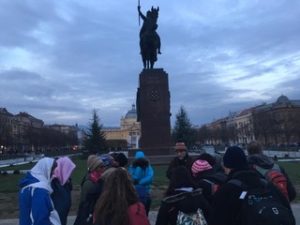 A statue of the first king of Croatia was also there on the highway. It was not him but a later king that cursed Croatia by saying that it didn’t deserve to be a kingdom for 1000 years …… and since then Croatia has been under foreign rule. It is a curse to be broken!

This highway went into the heart of the city which was the ruling part with the government, the church and other authorities. Someone from South-Africa had had a vision of the biggest Catholic Church before knowing anything about Zagreb. So to discover this church was an encouragement and a clear sign of what we needed to pray about. The connection between the church and the government was not in righteousness thus the heart of the city was sick. 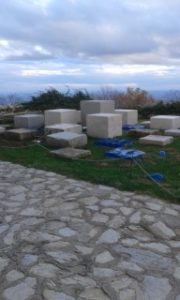 The connection with the right side and the left side of the heart was corrupt and sick, and needed some surgery. In this place with the authorities, there were also many back doors and tunnels with unholy agreements that needed some dealings with. We did all this in prayer on site with insight.

We also discovered the story about an evil queen who had a castle above the city, where she ruled it through witchcraft and other evil practices. (See more of her story on: https://www.secret-zagreb.com/zagrebblog//2011/09/black-queen.html) She lived in the 15th century. But recently a president of Croatia, when Croatia just had become a “new” country after the Balkan wars, had covenanted Croatia to the altars and the demonic principalities of this former evil queen. We understood the consequences of these covenants and 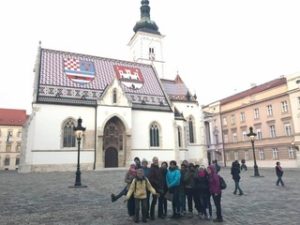 decided to go there to pray and break the spiritual influence. 4 people did this while the rest of the group continued to pray concerning the hidden covenants in the city before finishing off in front of the parliament. We prayed a lot for the new heart of Croatia. Croatia is a warrior people, but they have a tender heart. This tender heart needs to come forth for the beauty of the nation to shine as it should. We also prayed that this would happen to the government leading the nation in the right direction.