We started our prayer in Belgrade on Sunday Nov 20. We were well guided in Belgrade; first morning to church. This year the evangelical church in Serbia had started a prayer chain for a year. This is an encouragement for what is going on in Serbia. And on this day, the church we went to had the responsibility for the prayer. And we joined in for 90 minutes after the service to pray for the country.

In the afternoon we went to the Republican square. It was said that the one who had this place, had the city and nation in his hand. So, this was the heart of the nation. We had about 10 Serbians with us, placed in the center as we prayed for the heart of the city and the nation. It was great to call forth God’s intentions in a nation where there is so much hurt and brokenness. Well, what can you expect with a nation that has been attacked 115 times and destroyed to the ground 44 times in its history? We believe Serbia is a strong nation, but that it’s also has a purity and sense of righteousness they should fight for. 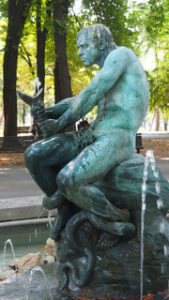 Afterwards we continued to the Kalemegdan park where we had discovered a strange sculpture of a fisherman and a serpent. The same sculpture was in Zagreb. The serpent is also a water spirit like the dragon in Ljubljana. We had gotten the revelation that there was a link between the 3 capitals holding them in captivity. We wanted to break this connection. So, we prayed there and poured wine in the mouth of the serpent. The day after we got a message from intercessors in South-Africa that they saw the serpent shrinking, not knowing what we had done. This was very encouraging; to know we had touched something.

The second day, we started to pray in the Kalemegdan park. While waiting for the local believers, we discovered a Muslim mausoleum. We just had to pray there before we met at the victory monument. This monument was put up by a Freemason, encouraging violence and death. Ps 64 was something received for this place and is quite descriptive of the secrecy and destruction from this masonic monument. We prayed that the covenant with death would be broken in this place. It is incredible how much the Freemasons had influence in this city. The next place we went to also; a small pyramid in the middle of the main walking street in front of a scientific center. Here we split up in 4 teams praying for the influence to be cut off and things to come up in the light.

We finished the day praying in front of the Town Hall. Someone had received a vision of a tree which represented the Town Hall, where the wind blew away leaves and some branches to make room for new things to spring forth. Yes, Spirit of God blow on this place!

The third day we went to the parliament and the park in front of it up to the presidential palace and the Town Hall. 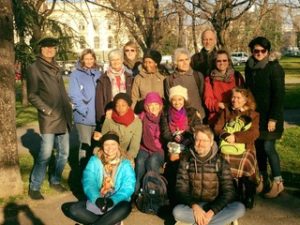 In 4 teams, we walked around the parliament (a circle) and the park (another circle) making an “eight” for new beginnings and the unrighteous covenants and bondages between the building to be cut off.

We prayed the stronghold and influence of communism to be cut off and for God to put His angels in each corner of the place. We prayed that corruption will come to the surface and corrupt people to be sent away from the government.