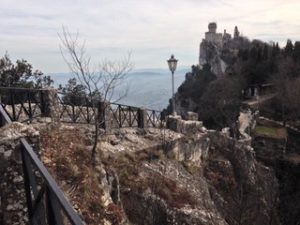 We had found a good lodging in some bungalows on a farm doing agri-tourism, only 7-8 km from San Marino. So we were ready first thing in the morning to go to this small nation. It is in the mountains of Apennine. Marinus started a monastic community there in 301 AD, which was the beginning of this beautiful country. They claim it to be the oldest constitutional republic. It has only 33 000 inhabitants. It’s very special and worth visiting.

We started our prayers at the place where St. Marinus started the monastic community. We prayed into that good foundation, which might be one of the reasons why it has been protected from invasions all these years, from the Roman Empire, Italy, Napoleon, Mussolini and others. We prayed for San Marino to come back to prayer as a foundational thing for their blessing and trust instead of the money as a tax-haven. We called forth a modern day house of prayer. We also felt God wanted to release the prophetic over and from this nation, which humanly speaking is nonsense, but in God, this is their destiny. We really felt we tapped into something of God.

This was the first of the 3 towers. We continued to pray at the 2 other towers similar thing of God taking back the places for His glory. We continued to cry out for “heaven to come down” with loud shouts.

Just before noon, we met with a British missionary couple and 2 Brazilians who came to join us in the prayer effort. We went to pray with them at the south tip of the city for the nation in general and the harvest. 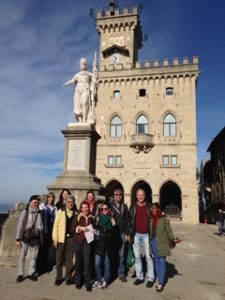 After lunch we went to pray at the parliament. We received that it was time. The time of God has come for San Marino. He will do new things in this special country. Maybe it’s linked to the finances and the tax-haven, now when EU demands that the bank accounts should be for their disposal; also for the freemasons in the place. It’s only since 2004 that the freemasons joined in with the British and international freemasons. We prayed for a dissolving of this and for God to bring things into the light. We declared that the King of Glory would go in there as it is written in Psalm 24.