We started in the morning at 10 am with joining the pastors’ monthly prayer meeting. Some of them had heard the good feed-back of ministry we had 2 days before, so they came expectant and open to receive. The worship was again powerful lead by David, the brother of Emanuele Di Martino who leads the House of Prayer. We were again able to minister and prophecy over people individually and collectively. It was very encouraging to see God touch hearts.

In the afternoon, we went to the Vatican. We were about 15 people grouping close to the obelisk in front of the St. Peter’s basilica. How blatant can it be; having an obelisk which is a symbol of idolatry right in front of the headquarters of the biggest church in the world? It is astonishing how we are blinded. So, this is definitely spiritual blindness and needs prayer for the eyes of the hearts to open up.

One lady in the team had had a vision 2-3 years before, seeing herself playing the guitar and worshiping the Lord with a team in front of the basilica. That vision came to pass that day. The worship and the prayer were good and inspired. It drew the attention of some people, but nothing more than that. You are allowed to worship in a place like that, even if it’s very touristic and religious, right? 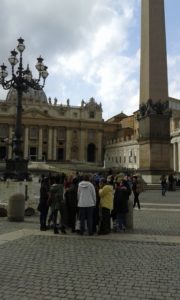 A vision was given about the Vatican being lifted up from the ground and a deep evil root was being pulled out of the ground. How this will happen is difficult to understand and figure out. But God is God, and nothing is impossible for Him. Our worship and prayer lasted maybe for 1 hour and 30 mins. When we felt we had done what God asked us to do, we quietly finished and thanked Him for the time and the honor of serving Him. Then we had a final photo of the team in front of the Vatican.