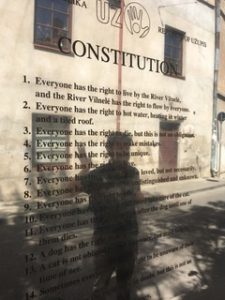 Vilnius was very different than the other 2 Baltic capitals. The church seemed to be very weak; paganism and rebellion seemed to be strongholds in the city. There was one place or area in the capital that had even declared their own ruling with their own law. It was more of a game, but the fact that they had their own statues and law written in 20 languages for the tourists says something.

We went to pray at 3 very heavy places that seemed to bind this city in this state:

First an altar of a duke and hero of the nation who was a strong follower of the paganism in the Middle Ages.

Second was the 3 crosses on the top of a hill over the city. Catholicism was forced on the city through the Teutonic knights and the crosses put up, but they continued with the paganism on the side; thus being rebellious against the Catholicism.

But when the communist knocked the crosses down, the Lithuanians build them up; thus again in rebellion against the authorities.

Third place was the central Gediminas Tower. A story said that to initiate this site a virgin was sacrificed on this place, and sacrifices to the pagan gods.

Then we finished our prayer where the Vilnia River went into the Neris River, as all these high places seemed to be linked to the river as well.

The next day, we went to the area having its own law as this seemed to be more than normal. The area also had its own statue with a goddess of freedom/rebellion.

Then we went to pray at the gate of Dawn with the black Madonna which seemed to be a significant place and influencing the city. 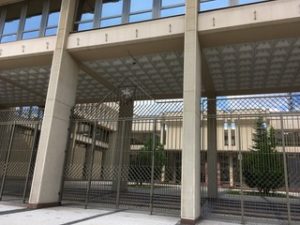 Then we headed to the parliament. It was warm and it was difficult in front of the very hostile parliament building; big fence and no sign of people. We prayed that a new sound and a new declaration will come out from this nation, which will celebrate its rebirth next year. We went to the place where every day at 19:18 pm they declare from the Grand Duke’s palace about the 100 years celebration. Let the declarations be from you, God.