Before coming to Chisinau, Moldova, we were told that the country was as Romania was 20 years ago. So, we were really surprised to see Chisinau clean and very modern. There was no graffiti on the walls, the cars were new and nice, the streets were clean and people were friendly. It still is a very cheap country and there is much to develop, but this was a very positive surprise.

We had written to several pastors in the country, but none responded, so we didn’t have any connections there. A lady in the hostel we stayed was a Christian on fire for the Lord though and she invited us to a service in the church Sunday morning. This was a church with 5 services on Sunday, so it was very active and lively. And we knew about other churches, so there are some Christians thriving in Moldova. From a church member, we heard that they had had some reconciliation events with the Jews and the messianic Jews just a couple of weeks before. This was very important as we knew that 40% of Moldova’s population were Jews at one time before pogroms in 1903-05, so that important. Prayers were done and that helped us to focus on the heart of the city and the line from the foundational well, where the city started to the government building. Chisinau. (The name of the spring “chisla nous” is believed to be the archaic Romanian for “new spring”). 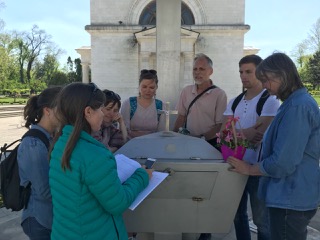 So, we wanted to start praying at the Metropolitan cathedral of Chisinau, which is an orthodox church and has Russian architecture. As we arrived there, there was a gathering of bikers receiving the blessings of the orthodox priest with holy water thrown on the bikers as a blessing for the biking season starting. So, that was interesting to see.

The small monument erected for the Holy Waters had drawn our attention the day we arrived and we thought there was some strange spiritual powers around it. We had a long time of prayers and declarations here after the bikers had left. 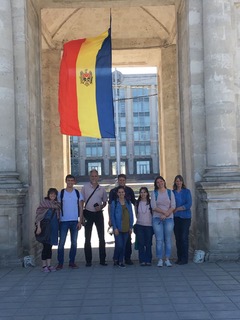 this line between the foundational well and the government building, there seemed to be different spiritual lines going out holding the people in bondage. So we prayed to cut these lines from certain monuments. The Holy Water monument was one The Triumphal Arch was the next monument where we prayed. Then there was an ancient stone erected in front of the government building. After these places, we went down to the river and where the fountain had been when Chisinau was founded in 1436 as a monastery village. Cement and roads had covered most of this and the river was small and polluted as they had also built a dam to use the waters for other purposes. We called this place back to its original purpose of being a well physically and spiritually. We anointed the place, sang and danced around the monument that was set up as a memory for the foundation of Chisinau. 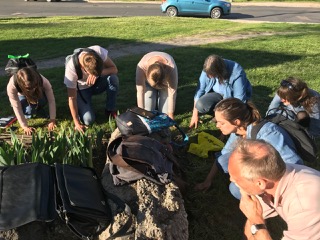 The second day, we had the parliament and the government building on the agenda to pray for. We started by the parliament. We started to pray for more life and creativity to come into this place and the people working there. We believe this will happen and many new things come forth in Moldova the next years. The life and ideas coming forth in the parliament; we prayed and prophesied that it will come reach the government as well. We believe that is a challenge; because of the old communist thinking in the old politicians might be a bottleneck for the new life. However, through wisdom this will change and new blood can come into the government as well. We felt a lot of hope for Moldova and felt that this “not wanted” country will change and people come here; tourists and business people.

It’s a beautiful country and a pearl of God’s creation longing for the revelation of the sons of God. It’s worth seeing and we left there with a sense of hope.